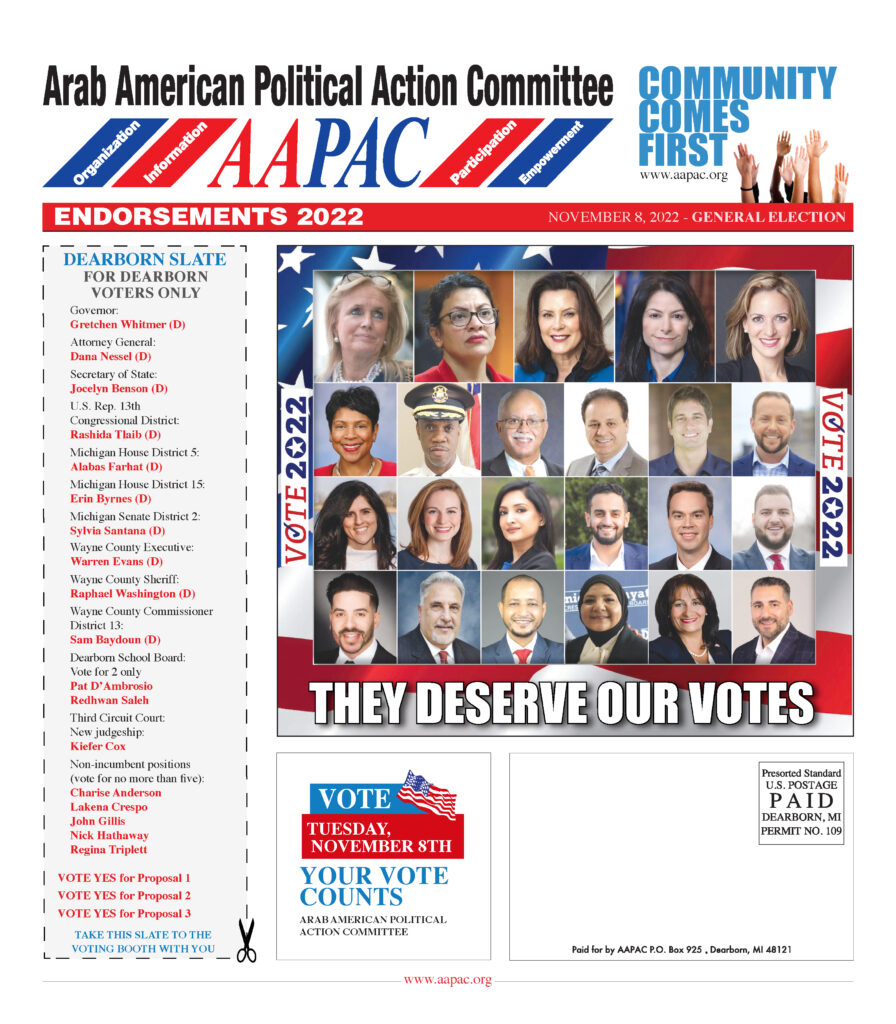 With the spread of misinformation within our community about Democrats, and a claim there is an agenda against our families and children, some Arab Americans are wondering why so many of us, as well as AAPAC, continue to support Democrats. It is shameful at this moment our community is being targeted and misled by Republican party agitators, but we are confident you will all see through it.

First, AAPAC is NOT a Democratic or Republican organization, our bylaws are clear about that. We have endorsed many Republicans in the past. They include former President George W. Bush, Spencer Abraham for U.S. Senate, and Mike Bouchard for U.S. Senate and Oakland County Sheriff. All of these candidates had reached out to Arab Americans as well as AAPAC directly and presented agendas that seemed good for our community, our state, and our country at the time. However, the Republican Party has largely turned away from us for decades, especially following the fateful years after 9/11, the election of Donald Trump, and as the party platform became more driven by radical Christian interest groups. Under Trump, we witnessed the worst attacks on immigrants, particularly Muslims during the “Muslim Ban”, and his former operatives are now trying to divide us in Dearborn and Dearborn Heights.

Democrats have held power in Wayne and Oakland County for some time with our continued support. Our community’s support for the Democratic Party is about an opportunity to be heard, inclusivity, and representation. This party has also supported us against many bigoted attacks, and has given us a chance at political power. Many Arab Americans from our own community have been elected or appointed to important positions in the county and state thanks to this ongoing support.

There are also some ideological issues; while Republicans wage war on environmental regulations, our most vulnerable in the South End of Dearborn continue to bear the brunt of corporate pollution. While our infrastructure crumbles causing floods, the Democrats passed a bill to build new infrastructure nation-wide… with no Republican votes. While Republicans attack social services and immigration, our community keeps fighting to empower our newly-arrived fellow Arabs and Muslims.

It is interesting to see Trump-aligned election hopefuls now seeking our votes without even making their own views openly known when they are in town. Gubernatorial candidate Tudor Dixon is known statewide for her offensive remarks about Muslim women and hijabs. We also know Republican Attorney General candidate Matthew DePerno has a hobby of making Islamophobic remarks.

Democratic incumbent nominees this November, like Governor Whitmer, who has consistently come to our cities — not just during elections — and heard our concerns, supported us through a pandemic and flooding, put us in executive positions in her office, and selected an unprecedented amount of Arab Americans for commissions.

Additionally, we have Secretary of State Jocelyn Benson, who supported our history-setting election translations in Dearborn and Hamtramck that many of us will take advantage of this November. Benson also modernized, revamped and improved accessibility of SOS functions that working people rely on, all during the constraints of a global pandemic.

We are also endorsing “The People’s Lawyer”, Attorney General Dana Nessel. Nessel appointed Solicitor General Fadwa Hammoud who became the first Arab American Solicitor General in the nation, as well as the first Muslim woman to argue a case in the U.S. Supreme Court. Nessel also hired other qualified Arab Americans in her office, including the first woman who wears a hijab as the Chief of the Child and Youth Services division. Nessel has consistently pushed for inclusivity and fairness, which only helps our community and its integration in American society.

We hope our community does not get fooled or misled. Supporting Democratic candidates by no means signifies parting ways with our conservative Arab and Muslim values. Individuals in our community will continue to freely worship and to express themselves on any issue. The same way we don’t want anyone to impose their values on us, we should not impose our values on others. Not doing so does not mean we agree with everything people from other cultures or religions do, or that we want to be like them. We just respect their choices.

WE ASK THAT YOU VOTE FOR THESE ENDORSED CANDIDATES WHO WE STRONGLY BELIEVE WILL BEST SERVE OUR COMMUNITIES AND THE STATE OF MICHIGAN.

Dearborn School Board: (Vote for 2 only)
Pat D’Ambrosio
Redhwan Saleh

VOTE YES for Proposal 1
A proposal to amend the state constitution to require annual public financial disclosure reports by legislators and other state officers and change state legislator term limits to 12 total years in the legislature.

VOTE YES for Proposal 2
A proposal to amend the state constitution to add provisions regarding elections.

VOTE YES for Proposal 3
A proposal to amend the state constitution to establish new individual rights to reproductive freedom, including the right to make all decisions about pregnancy and abortion; allow the state to regulate abortion in some cases; and forbid prosecution of individuals exercising the established right.